Back in the early days of the web, everything was static. To create a website, you had to write HTML files and put that on a server somewhere - simple as that. In the 90s, as websites became more complex and server rendered, HTML became the norm.

This was a huge deal back then as it enabled non-technical people to edit any website content instantly. A drawback of this approach, however, was that server side rendering was and is slow. In addition, as the web became increasingly complex over the decades, server-side rendering was just not cutting it anymore.

In 2016, Matt Biilmann (co-founder of Netlify)  and Chris Bach introduced the concept of Jamstack. The Jamstack architecture brought back the early days of the static web —albeit enhanced with Javascript, reusable APIs, and the cloud.

But over the past six years, Jamstack has become more than just another way of making websites. In this article, we explore in-depth what Jamstack is and show you why Jamstack is better than WordPress.

In this article, we'll cover

Jamstack is a web development ecosystem where you can choose what tech and frameworks to use. Unlike websites and web apps built on a monolithic architecture, there's no single monolithic CMS tied to a backend or database –you can choose your preferred frontend framework or Jamstack CMS. 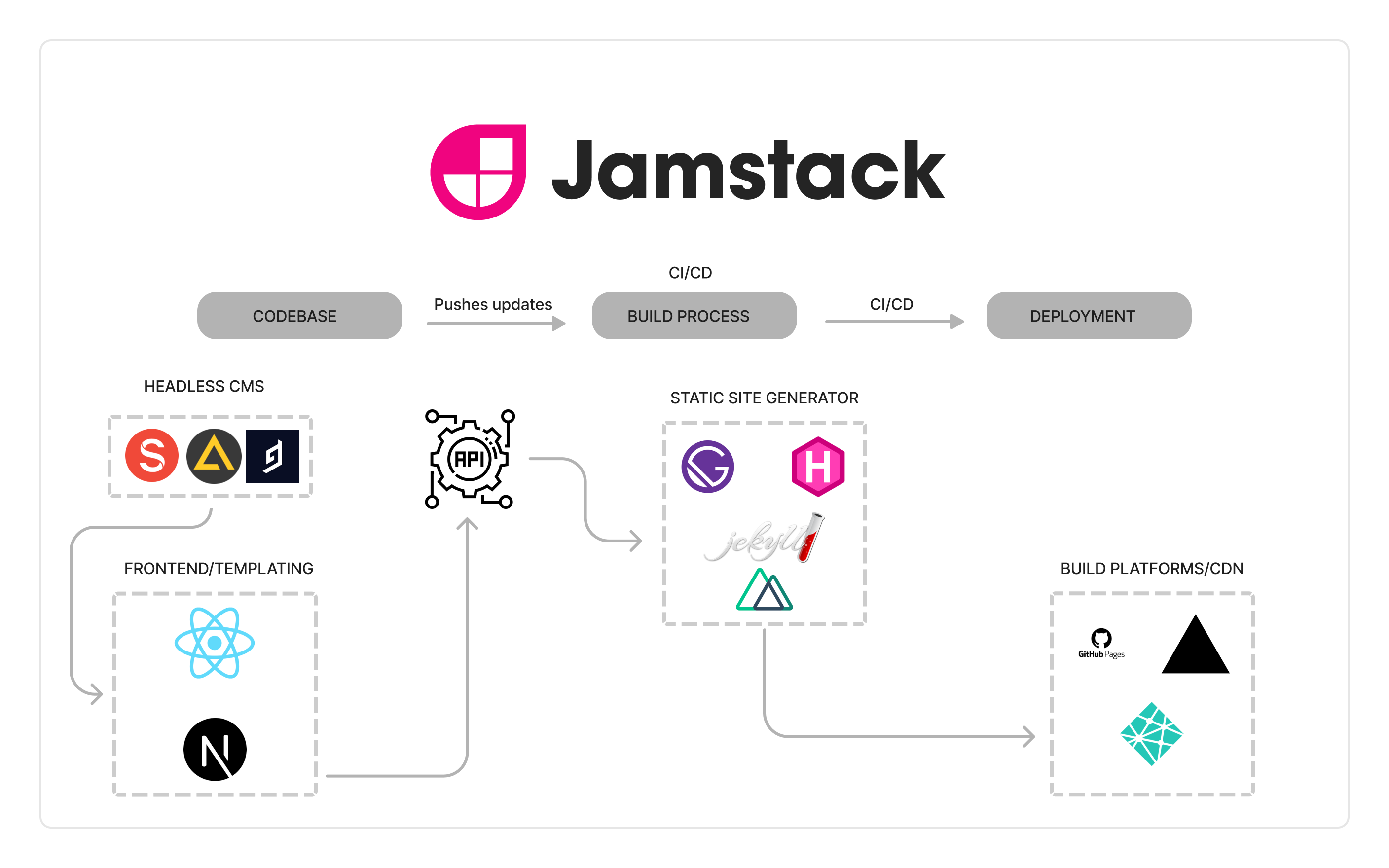 Did you know: the abbreviation "Jamstack" comes from Javascript, APIs, and Markup (the JAM in JAMstack).

JavaScript handles all the dynamic elements and functionalities of the site. With this, developers can use their favorite frameworks to build the dynamic layer of the website or app.

All the server-side operations occur between reusable APIs that connect your back and front end. These reusable APIs are accessed over HTTPS using JavaScript.

Since Jamstack sites are served to the visitor as static HTML files, it's possible to generate them from source files or structured data like XML, JSON, or Markdown using a static site generator like Gatsby.

A typical Jamstack website combines multiple cloud based services with microservice APIs to render static HTML that can be easily and efficiently served globally on a Content Delivery Network (CDN).

In practice, this means you can build serverless websites kinda as you did in the early days of the web. Just simple, static files and HTML.

The anatomy of a Jamstack app

Have you ever wondered what goes into building a Jamstack app? Let’s discuss the different components that make up a Jamstack app and how they work together to create digital experiences and storefronts.

Traditional CMSs like WordPress are based on themes that don’t support omnichannel content delivery and lack content reusability. In a Jamstack app, a developer can use a headless CMS to create content that lives in a markup format and can be delivered to multiple frontends or devices. Plus, a headless CMS serves as the neural center that connects the other pieces that power Jamstack-based digital experiences.

Static site generators (SSG), such as Gatsby, Next.js, Nuxt, and Hugo build static websites based on HTML files that are created at build time and served from a CDN. SSGs allow developers to serve websites that look and feel like a dynamic website, keeping your digital experiences blazing fast.

Another cool thing about the Jamstack architecture is that you can augment your websites and Jamstack apps with API-driven services. Rather than baking features in, Jamstack-ready CMSs allow you to integrate third-party software using APIs. For example, add Shopify for eCommerce, Auth0 for authentication, and AWS as your content delivery network.

Once you’ve chosen each tool of your web app’s tech stack, you can use a Jamstack-ready deployment platform like Netlify, Vercel, and Github to deploy your website in minutes, effectively saying goodbye to the old, cumbersome FTP servers.

For instance, an example Jamstack app could look like this:

Why are market leaders migrating to Jamstack?

The reason is simple: building a Jamstack site has become easier and more cost-effective than ever, and market leaders have noticed the changing trend.

According to data from the 2021 Jamstack Community Survey, 32% of the surveyed developers are working for multimillion-dollar companies in the advertising and marketing, education, finance, and healthcare sectors. Most Jamstack sites were either portfolio sites or small eCommerce stores a couple of years back. Nowadays, Jamstack is reaching maturity with companies like Nike building sites powered by Jamstack.

Unlike traditional, monolithic solutions like WordPress and Drupal, which can only scale as much as their servers, hosting, and CMS allows them to, Jamstack sites are almost infinitely scalable.

You can build a Jamstack project and go from zero to hero without fear that your website will be obsolete and bloated in five years. Instead, you can grow your digital presence at the same rate as your company, enabling businesses of all shapes and sizes to build fast, competitive digital experiences.

Since WordPress is a monolithic system, it's impossible to just replace the frontend framework or your CMS as they are part of the same system and can't be swapped. However, in a Jamstack website, you could replace that part of your stack without affecting your entire website.

Finally, in a Jamstack static website, every single file, static asset, and resource is pre-built and stored on a global CDN as JSON or XML.

By serving a static file cached on a CDN, you not only achieve faster loading speeds but can also deliver content to other channels like smartwatches, IoT devices, and digital signage. You no longer need monolithic and heavy back-end frameworks like WordPress, Drupal, or Joomla to build a website or a web application.

We wrote an article that hones in on the debate of Jamstack vs. WordPress. Take a look if you want to find out what makes Jamstack a better option for building websites.

Jamstack sites are fast and incredibly customizable, but that’s not all the benefits. When built using the best practices and the right tools, Jamstack sites can be performant, secure, and scalable.

So, let's go deeper into the benefits of the Jamstack framework to understand what makes it a solid architectural choice.

Like with everything, the Jamstack ecosystem is not completely perfect. There are a few drawbacks that are worth mentioning. This includes:

Migrating from WordPress to Jamstack

If you decide to migrate, don't be afraid. While migration sounds like a long, tedious process, migration doesn't have to be hard. In fact, a Jamstack agency can help you find a migration path that suits you, be it a piecemeal migration or a complete one. Your path will depend on factors like the number of plugins and shortcodes you're using and the size and amount of content of your site.

However, you can migrate to Jamstack gradually by building a Jamstack layer in front of the site and migrating requests slowly until the whole site has been transferred to a Jamstack CMS. The Jamstack approach minimizes downtime and reduces negative impacts on the user experience.

Choosing a headless CMS for Jamstack

Development with legacy solutions such as WordPress is slow and frustrating for developers. WordPress gets bloated quickly, and after a while, it becomes unwieldy. A Jamstack CMS unlocks your developers' true potential and allows them to build digital experiences using modern technology stacks.

Jamstack CMSs come ready for the future. By combining the JAM of the Jamstack with version-control tools like GitHub, the right headless CMS can build and serve content fast, allowing snappy performance.

The problem is that not all CMSs are created equal and that it all depends on what you want to do with them. We've tested most of the headless platforms in the market and can recommend five of them: Agility CMS, Dato, Sanity, Hygraph, and Prismic.

We wrote a deep article about why we think they are the top headless CMS for Jamstack. Feel free to check it out if you want to know more.

Closing thoughts: Jamstack is a must-have architecture for any modern web project

Jamstack is becoming the de-facto tech architecture for forward-thinking companies. Enterprise companies are migrating to Jamstack daily because it grants them the speed and flexibility that monolithic solutions like WordPress wouldn't afford them.

When compared to WordPress, Jamstack sites are nimbler and much more modular. They also allow using best-of-breed tools to create custom websites and digital experiences.

When coupled with the right headless CMS, Jamstack websites will give a competitive advantage that you'll never want to look back to something like WordPress again after you've tried them.

If you need help navigating the Jamstack ecosystem, let's talk. We can answer all questions you have about Jamstack development.

Please leave us a message and we'll be in touch with you. We're happy to discuss your project in more detail in a one-to-one session.

Find useful posts and resources by Ikius to stay up to date on modern web development trends such as Jamstack - written from an agency's perspective.

How to choose a Jamstack agency

Next.js vs. React: A Multi-Factor Comparison

Why Migrate from WordPress to Jamstack?